1. ONEâS OWN HEARTH IS WORTH GOLD 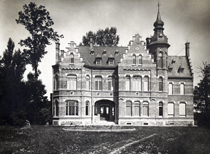 - Text in orange is clickable -

Proverbs that emphasise the importance of real estate appear in many languages. Every human needs a roof over their head and space to develop activities. But the demand amply exceeds the supply. Not everyone can secure a piece of land, a house or building. The distribution of property across the population determines (and reflects) the social order of a society to a considerable extent. Immovable objects also fulfil an important economic function due to the scarcity, permanency and high value of these goods. Substantial fortunes are traded on the real estate market and these fortunes directly influence the general economic situation.

This finding is not only applicable today. Real estate also played a key role in pre-industrial society from an economic, social, political and cultural viewpoint. Agriculture governed society until far into the nineteenth century. Land provided a vital income to masses of farmers. It was the era of large-scale landownership in which urban capital was pre-eminently invested in real estate. The power and status of the social elite rested to a considerable extent on the possession of land. The dominance of landownership was even perceptible in political representation, which was organised based on census suffrage in Belgium until 1894.

In response to industrialisation in the course of the nineteenth century, old structures were subjected to pressure and property proportions changed. The transition from a traditional society to a modern society was not a linear process with regard to the distribution of real estate. In general, investments in properties decreased in the course of the century in favour of other forms of investment, but this process does not appear to have taken place everywhere. In some areas the power of large-scale landownership increased, partly due to the emergence of new groups of rich people who invested in land. For many others, modernisation led to impoverishment and proletarianising.


1. One's own hearth is worth gold
2. Real estate and scientific research
3. The land registry as a historical source