3. THE LAND REGISTRY AS A historical SOURCE 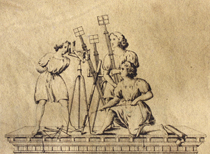 - Text in orange is clickable -

The land registry ('kadaster' in Dutch or 'cadastre' in French) has kept a detailed inventory of all properties and owners on Belgian territory since 1834. Unfortunately, the archives of this government agency are difficult to exploit for research that transcends the local level. Because the real estate data are primarily arranged per district or municipality, the land registry is characterised by enormous territorial fragmentation (ca. 2500 municipalities). Many registers must be consulted in order to map the property proportions for a larger area. This job is further hampered by the way that the numerous mutations were recorded in the original registers. Researchers who want to obtain a snapshot of landownership relations after 1834 must filter the relevant data from a wealth of cadastral data, which requires a lot of effort. Finally, the terms and conditions for consultation must be mentioned. The archives of the land registry still largely rest with the General Administration of Patrimonial Documentation (AAPD), where it is not freely consultable for the general public.

The hindrances described above prevent an efficient exploitation of the cadastral sources. Therefore, research topics that require the large-scale processing of patrimony data remain unanswered. There is a way to by-pass some of these limitations. Researchers can fall back on sources that derive from the official land registry. Popp's cadastral Atlas of Belgium is a viable alternative.


1. One's own hearth is worth gold
2. Real estate and scientific research
3. The land registry as a historical source